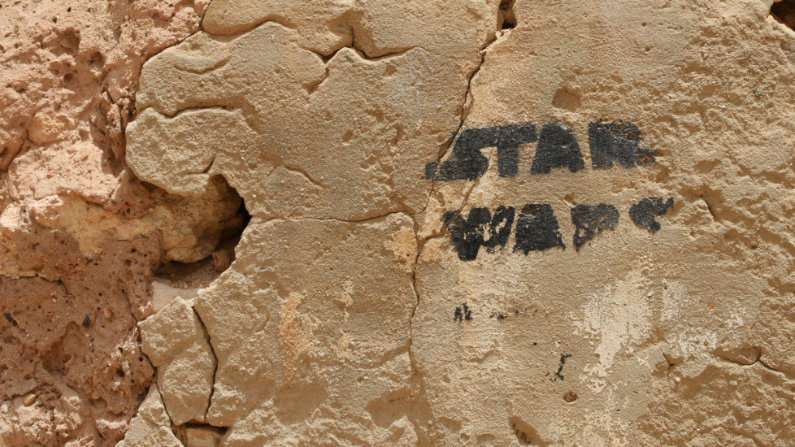 Take a half-day Star Wars island tour on Djerba island in Tunisia. Skellig Michael island in Ireland seems to be on every Star Wars fans’ bucket lists of places to visit since its feature in Episode VII: A Force Awakens and Episode VIII: The Last Jedi. However, decades before the latest trilogy were in the works, Djerba island was used as the backdrop for memorable scenes in Episode IV: A New Hope.

Djerba Island: How to Get There

Djerba is the largest island of Tunisia. It sits just to the east of mainland Tunisia, in the Mediterranean Sea. It is full of amazing beaches and beach resorts as well as other attractions that will keep you busy on your holiday. This island has a history that is beyond the scope of this post including Roman, Spanish, Italian, and even a pirate past. There is much more to see and experience along with the Star Wars film sites.

You can reach the island in one of three ways. Djerba has its own airport connecting the island with the capital of Tunis in the North as well as several European cities including Paris & Lyon. Alternatively, you can rent a car and drive yourself across the Causeway connecting the island to the mainland toll-free. This amazing causeway was originally built by the Romans and has been updated over time. The third and final way of arriving on the island is by ferry, letting you off just minutes from two of the film locations in the town of Ajim. 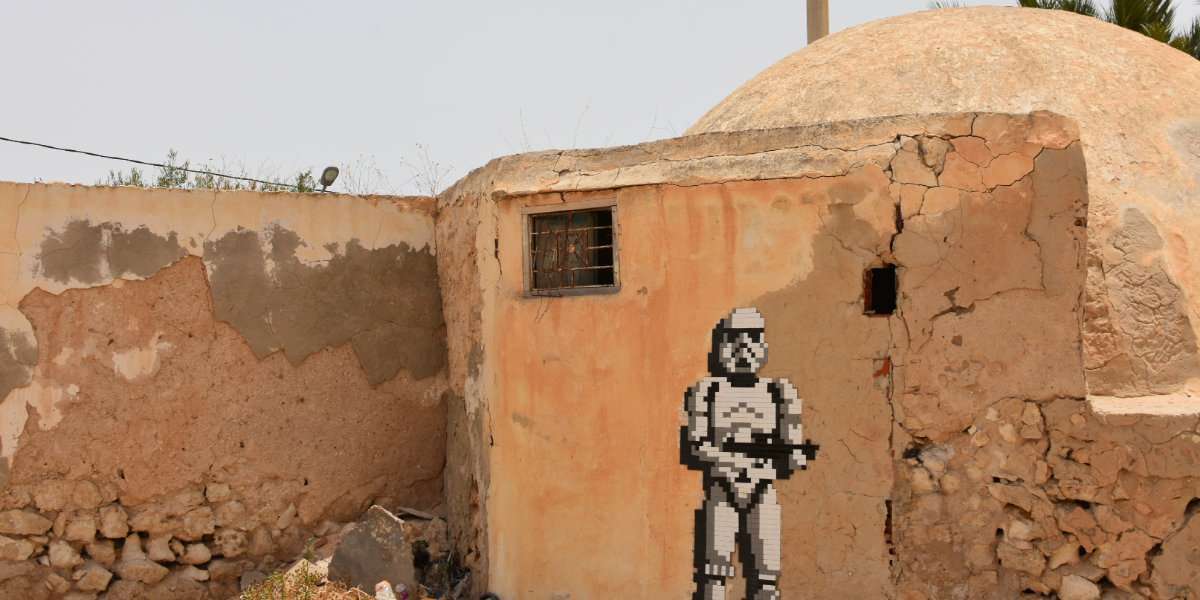 You will begin your Star Wars island tour just over a kilometer away from the ferry dock in Ajim. The building used for the exterior of the cantina depicted in A New Hope is also known as Chalmun’s Cantina. It was previously a local bakery and has been since abandoned. There is chatter that other Star Wars enthusiasts are fundraising to restoring the building back to its Star Wars glory. It currently has various Star Wars logos spray painted on its sides and an 8-bit tile artpiece of a Storm Trooper. 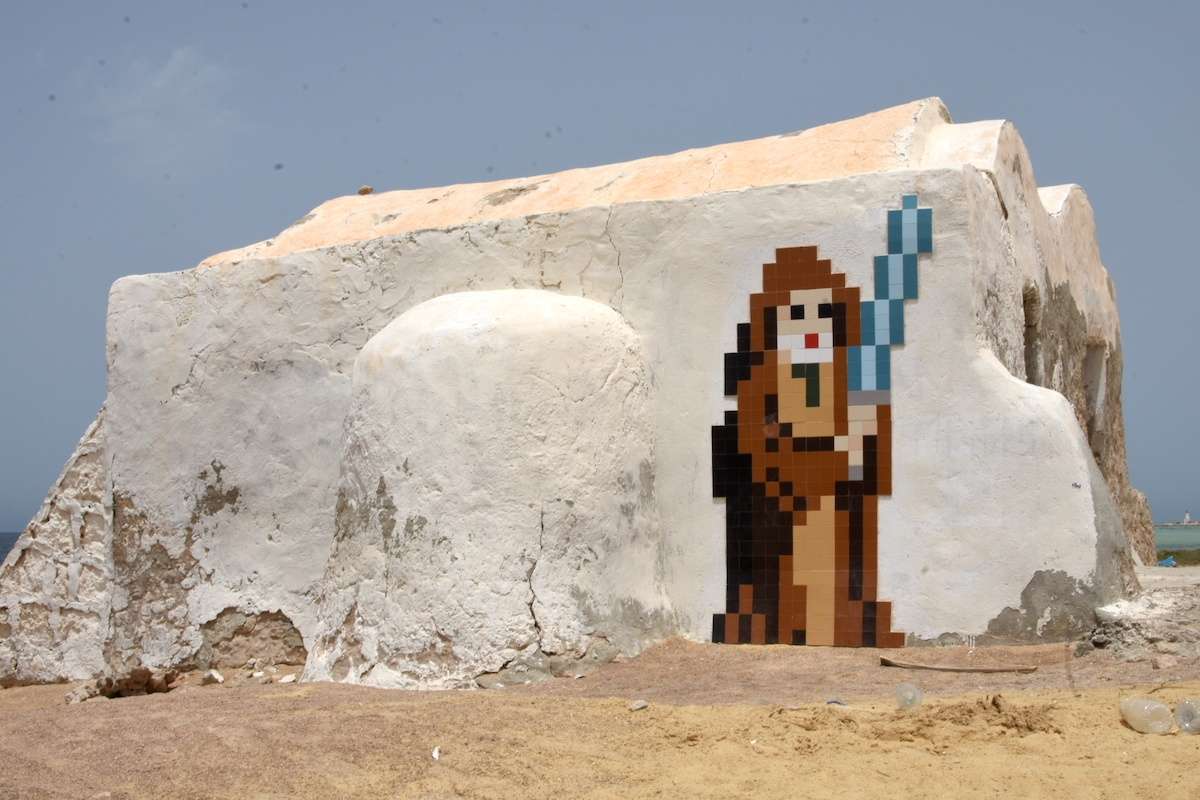 Continue your Star Wars island tour with a short 5-minute drive along the western coast of the island, bringing you to a solitary building re-imagined in Episode I as Ben Kenobi’s home. Much CGI work was done to re-create this beautiful island landscape into a galactic hideaway for the film. It is currently an empty shed (not even a door in the doorway!) where local fishermen store their equipment. The last time I visited, a Tunisian man was just retrieving his bicycle he left inside. 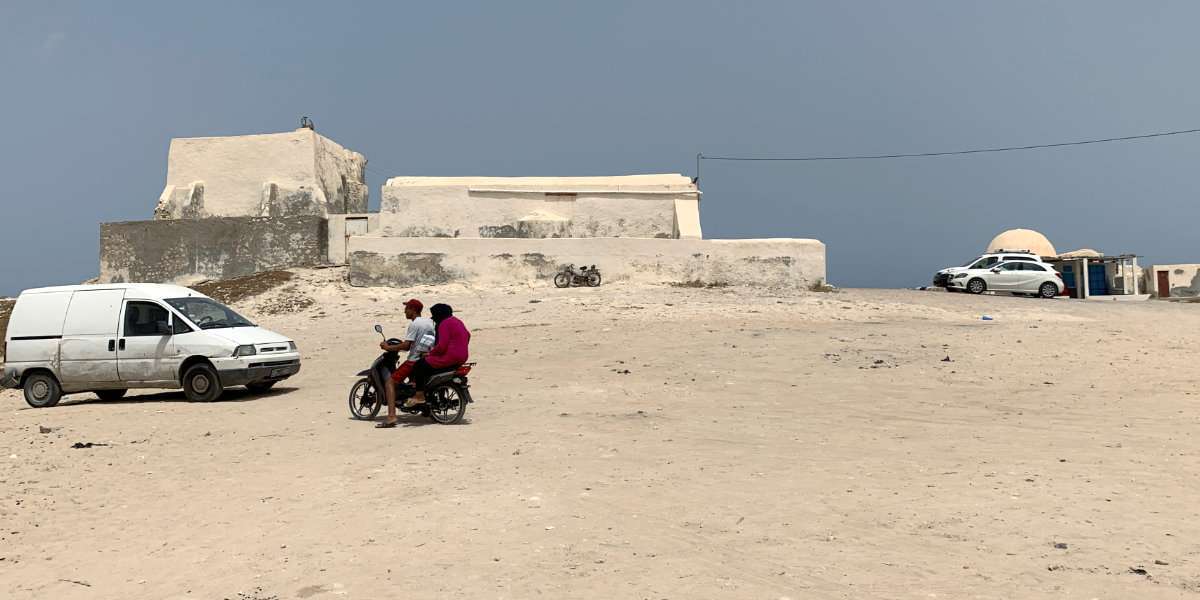 Another short drive completes your Star Wars island tour with the Tosche Station. This site is only mentioned by Luke Skywalker as he speaks with Aunt Beru and Uncle Owen about his plans to get some new batteries in A New Hope. The actual scene was cut from the film but included in the extras on recent DVD’s and Bluerays.

The Tosche Station is situated next to several small restaurants where you can have a nice fish lunch or just a cup of coffee before concluding your Star Wars island tour.

This island circuit is included in our 8-day Tatooine: Outer Rim Tour and 13-day Roman & Galactic Empires Tour. With other locations scattered throughout the South of Tunisia, our Tunisia travel experts would love to assist you in planning your multi-day holiday. Contact us today for your free tour quote.

starwars.tours
•
Follow
Go on the hunt for a T-14 Hyperdrive Generator with Qui-Gon. "Republic credits will do fine." 🫳 💰️⁠ ⁠ Book your trip to Watto's junkyard and get more than a 2nd hand hyperdrive generator!⁠ ⁠ #tunisia #starwars #travel #watto #quigon⁠ ⁠
View on Instagram |
3/5

starwars.tours
•
Follow
The ancient people of Matmata dug pits into the ground and sides of hills to find refuge from the scorching heat. Families still inhabit these dwellings. The most famous was used by George Lucas as the childhood home of Luke Skywalker.⁠ ⁠ Double tap if you want to come spend the night here.⁠ ⁠ #tunisia #travel #starwars #luke #skywalker #georgelucas
View on Instagram |
4/5

starwars.tours
•
Follow
This boulder hasn't changed much since the Jawas walked past it with R2D2 fifty years ago. 🪨⁠ ⁠ Visit our website to see learn more about our private custom Star Wars tours.⁠ ⁠ #travel #tunisia #starwars #r2d2 #jawa
View on Instagram |
5/5
View on Instagram