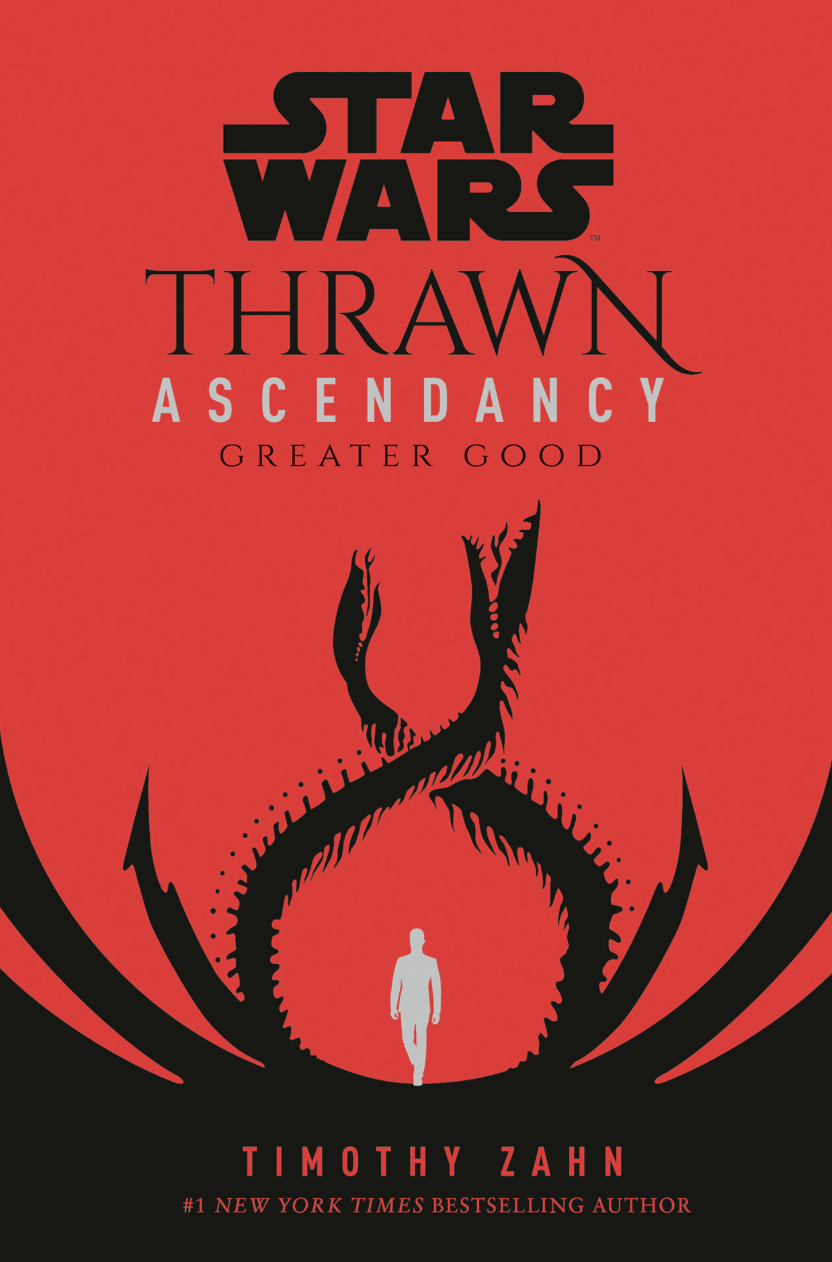 The second book in the new Thrawn-centered trilogy, from writer Timothy Zahn, is coming soon. Today, StarWars.com released the first exclusive excerpt for the book, titled Star Wars: Thrawn Ascendancy: Greater Good, which will continue the origin story of the Chiss who joined the Empire. Here is a sneak peek at the new excerpt (you can check out the rest of it, as well as the audio version on the StarWars.com original article):

Throughout her years in the Chiss Expansionary Defense Fleet, Admiral Ar’alani had lived through more than fifty battles and smaller armed clashes. The opponents in those encounters, like the battles themselves, had varied widely. Some of them had been clever, others had been cautious, still others—particularly political appoin­tees who had been promoted far beyond their abilities—had been painfully incompetent. The strategies and tactics employed had also varied, ranging from simple to obscure to screamingly violent. The battle results themselves had sometimes been mixed, sometimes in­conclusive, often a defeat for the enemy, and—occasionally—a defeat for the Chiss.

But never in all that time had Ar’alani experienced such a mix of determination, viciousness, and utter pointlessness as in the scene now unfolding in front of her.

“Watch it, Vigilant—you’ve got four more coming at you from starboard-nadir.” The voice of Senior Captain Xodlak’in’daro came from the Vigilant’s bridge speaker, her resonant alto glacially calm as always.

“Acknowledged, Grayshrike,” Ar’alani called back, looking at the tactical. Four more Nikardun gunboats had indeed appeared from around the small moon, driving at full power toward the Vigilant. “Looks like you have a few latecomers to your party, as well,” she added.

“Good,” Ar’alani said, studying the six missile boats that had ap­peared from behind the hulk of the battle cruiser she and the other two Chiss ships had hammered into rubble fifteen minutes ago. Sneaking into cover that way without being spotted had taken some ingenuity, and many commanders with that level of competence would have used their skill to exercise the better part of valor and abandon such a clearly hopeless battle.

But that wasn’t what these last pockets of Nikardun resistance were about. They were about complete self-sacrifice, throwing them­selves at the Chiss warships that had rooted them from their bur­rows, apparently with the sole goal of taking some of the hated enemies with them.

That wasn’t going to happen. Not today. Not to Ar’alani’s force. “Thrawn, the Grayshrike has picked up a new nest of nighthunters,” she called. “Can you offer them some assistance?”

“Certainly,” Senior Captain Mitth’raw’nuruodo replied. “Captain Lakinda, if you’ll turn thirty degrees to starboard, I believe we can draw your attackers into a crossfire.”

“Thirty degrees, acknowledged,” Lakinda said, and Ar’alani saw the Grayshrike’s tactical display image angle away from the incoming missile boats and head toward Thrawn’s Springhawk. “Though with all due respect to the admiral, I’d say they’re more whisker cubs than nighthunters.”

“Agreed,” Thrawn said. “If these are the same ones we thought were caught in the battle cruiser explosion, they should be down to a single missile each.”

“Actually, our tally makes two of them completely empty,” Lakinda said. “Just along for the glory of martyrdom, I suppose.”

“Such as it is,” Ar’alani said. “I doubt anyone out there is going to be singing the elegiac praises of Yiv the Benevolent anytime soon. Wutroow?”

“Spheres are ready, Admiral,” Senior Captain Kiwu’tro’owmis confirmed from across the Vigilant’s bridge. “Ready to rain on their picnic?”

“One moment,” Ar’alani said, watching the tactical and gauging the distances. Plasma spheres’ ability to deliver electronics-freezing blasts of ionic energy made them capable of disabling attackers with­out having to plow through the tough nyix-alloy hulls that sheathed most warships in this part of the Chaos. Smaller fighter-class ships, like the Nikardun missile boats currently charging the Vigilant, were especially vulnerable to such attacks.

But the missile boats’ smaller size also meant they were more nim­ble than larger warships, and could sometimes dodge out of harm’s way if the relatively slow plasma spheres were launched too soon.

There were tables and balance charts to calculate that sort of thing. Ar’alani preferred to do it by eyesight and experienced judgment.

And that judgment told her they had a sudden opportunity here. Another two seconds . . . “Fire spheres,” she ordered.

There was a small, muffled thud as the plasma spheres shot from their launchers. Ar’alani kept her eyes on the tactical, watching as the missile boats realized they were under attack and scrambled to evade the spheres. The rearmost of them almost made it, the sphere flicker­ing into its aft port side and paralyzing its thrusters, sending it spin­ning off into space along its final evasion vector. The other three caught the spheres squarely amidships, killing their major systems as they, too, went gliding helplessly away.

“Three down, one still wiggling,” Wutroow reported. “You want us to take them?”

“Hold on that for now,” Ar’alani told her. It would be at least an­other few minutes before the missile boats recovered. In the mean­time . . . “Thrawn?” she called. “Over to you.”

Ar’alani shifted her attention to the Springhawk. Normally, she would never do this to the captain of one of her task force ships: giv­ing a vague order on the assumption that the other would pick up on her intent. But she and Thrawn had worked together long enough that she knew he would see what she was seeing and know exactly what she wanted him to do.

And so he did. As the four momentarily stunned missile boats headed off on their individual vectors, a tractor beam shot out from the Springhawk’s bow, grabbed one of them, and started to pull it in.

Pulling it directly into the path of the cluster of missile boats charging toward the Grayshrike.

The Nikardun, their full attention focused on their suicidal attack on the Chiss cruiser, were caught completely off guard by the vessel angling in on them. At the last second they scattered, all six manag­ing to evade the incoming obstacle.

But the disruption had thrown off their rhythm and their aim. Worse than that, from their point of view, Thrawn had timed that distraction for the precise moment when the Nikardun fighters came into full effective range of the Grayshrike’s and Springhawk’s spec­trum lasers. The missile ships were still trying to reestablish their configuration when the Chiss lasers opened fire.

Twenty seconds later, that section of space was once again clear of enemies.

“Well done, both of you,” Ar’alani said, checking the tactical. Aside from the disabled missile boats, only two Nikardun ships out there still showed signs of life. “Wutroow, move us toward target seven. Spectrum lasers should be adequate to finish him off. Grayshrike, what’s your status?”

“Still working on the thrusters, Admiral,” Lakinda said. “But we’re sealed again, and the engineers say they should have us back at full power in a quarter hour or less.”

“Good,” Ar’alani said, doing a quick analysis of the debris and bat­tered ships visible through the Vigilant’s bridge viewport. There shouldn’t be any places out there where more ships could be lurking.

Star Wars: Thrawn Ascendancy: Greater Good comes out on May 4, 2021, but you can already pre-order it here. In addition to the excerpt, the Star Wars website also released an exclusive poster from Jeremy Wilson that is only available to purchase with the Barnes & Noble edition: 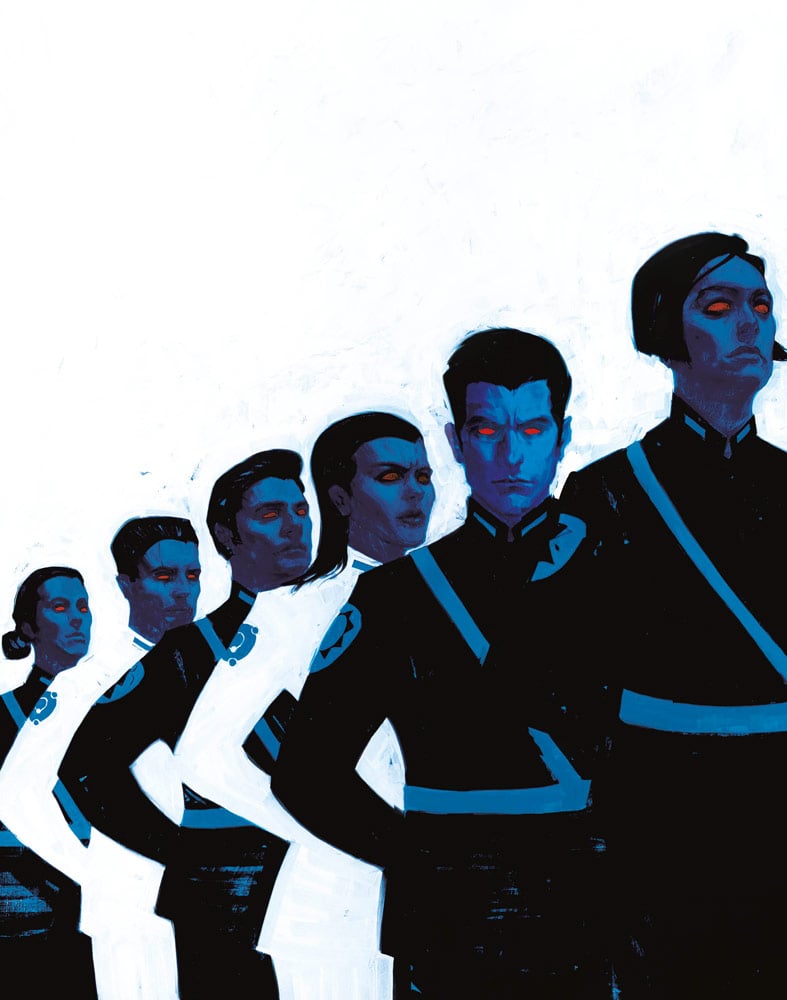