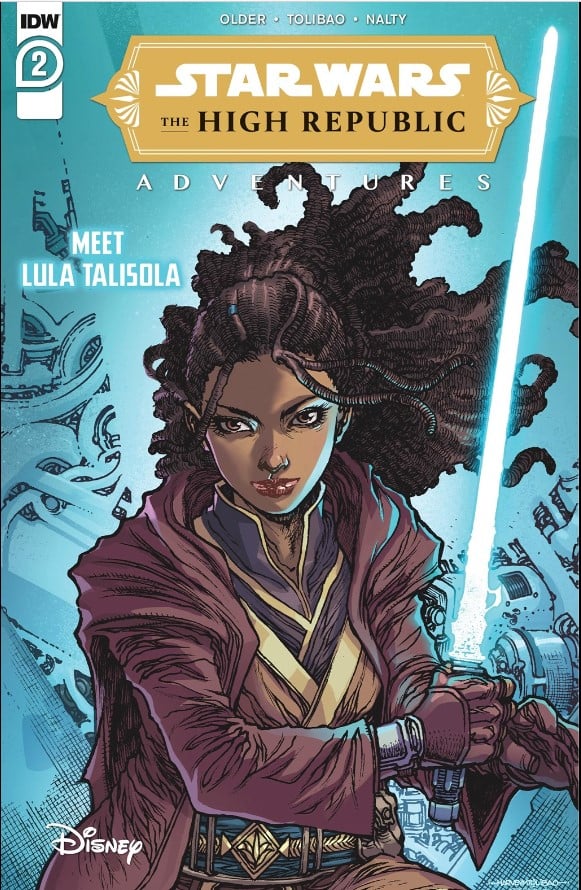 Issue #2 of Star Wars The High Republic Adventures is out. Let’s catch up with the Padawans as they defend a city from catastrophe and themselves from the Nihil…

In issue #1, the Jedi and Padawans were protecting Bralanak City from falling debris spewing from an emergence of the Legacy Run disaster. At the same time, the mysterious Nihil arrived to escort the leader of this city, Elder Tromak, off planet. A young alien girl named Zeen Mrala embraced the Force, which she had been told should never be used and helped the padawans deflect debris away from the city. Her friend Krix felt betrayed by Zeen for keeping her force powers secret. Elder Tromak tried to talk him into going with the Nihil. Eventually, the Nihil surrounded the Padawans and a dark figure (Marchion Ro) ordered the Nihil soldiers to kill them.

Issue #2 starts with Padawan Lula Talisola giving the order to fight. In her defense, the Nihil called her “Jedi scum” when they called for the Padawans surrender…so, they sort of had it coming. In the previous issue, she expressed a lack of self confidence. However, when asked what they should do, Lula didn’t hesitate to take command and gave the order to fight the Nihil. The rest of the padawans clearly looked to her for leadership.

Thankfully, the Padawans didn’t have to fight the Nihil alone. Masters Yoda and Torban “Buckets of blood” Buck finally arrived to help. I kid you not, his nickname is “Buckets of blood”. If you’re thinking that’s a bit odd, you’re not alone. The reaction of the Padawans was pretty much exactly what I thought. 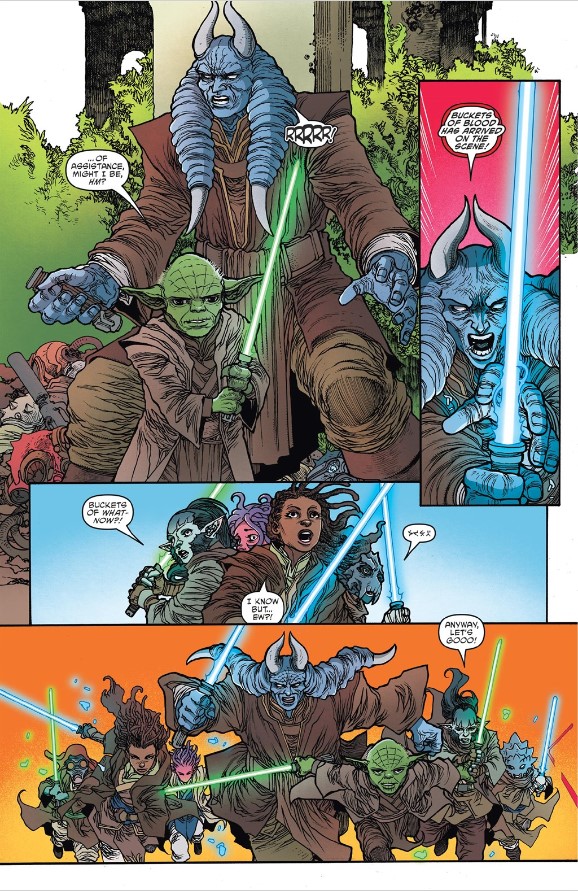 While the Jedi fought the Nihil, Marchion Ro and Elder Tromak discussed Krix’s concern over Zeen. Zeen was helping the Jedi defeat the Nihil soldiers and Marchion Ro seemed content to leave him in the doomed city. Tromak seemed to have genuine concern for Krix and insisted that he was his assistant and vital to getting the information Ro wanted. It’s interesting Tromak seemed to already know what Marchion Ro wanted from him. Perhaps there was an existing relationship there? Also, Ro already knew how Tromak’s people felt about the Force. Meanwhile, while fighting the Nihil, Zeen told the Jedi that her friend Krix was a prisoner of the Nihil and that they needed to rescue him. Citing the risk that Zeen took to save the city, Yoda agreed and went to find him.

In another interesting piece of information, Marchion Ro spotted Yoda and recognized him. How does he know who Yoda is? Was Yoda well known at this time or has Marchion Ro met him or heard of him before? Either way, he knew Yoda was trouble and ordered that he not be let anywhere near the ship because he could ruin everything. As Marchion Ro’s ship prepared to leave he got a message that Yoda had disappeared. He demanded that Krix make himself useful and find Yoda. Already fearful of the force and those who use it, and also betrayed by his friend, Zeen, he promised to find Yoda and headed off.

As the Jedi tried to fight their way to safety, Yoda searched the Nihil ship for Krix while Krix searched for Yoda. Yoda found a container with something interesting in it, but we didn’t see what it was. They eventually found each other and Yoda tried to talk him into going with him to meet up with Zeen. But, while torn, Krix eventually called for help and alerted the crew that he had found Yoda and Yoda was forced to flee without him. 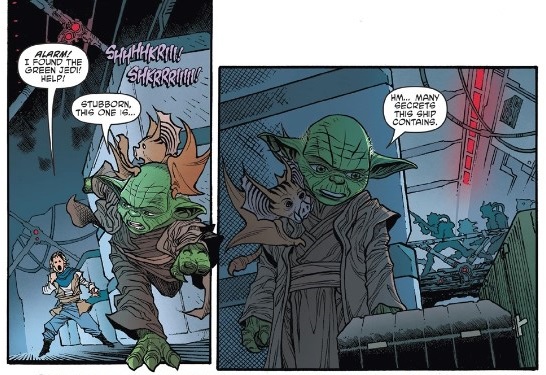 Yoda met up with the Jedi, who were outside waiting for evacuation by the recently arrived Republic Rescue Fleet. Earlier in the issue we learned that Master Torban “Buckets of blood” Buck was a healer and not much of a fighter. The Padawans asked Master Buck why he went by that nickname. He told them that he was a healer and helped to keep the blood within the body, not to take it out. With surprised looks on their faces we then saw this nightmare inducing image:

As the Nihil spider ship took off, Master Buck assured the gathered crowd that a blockade was there to prevent their departure from the system. However, aboard the spider ship, Marchion Ro said “Hold my spotchka” and fired a shot into the medical frigate in the Republic Rescue fleet. As he predicted, the other ships hurried to assist it and the creepy ship plowed through the blockade. When Krix showed concern over leaving the system, Ro reminded him that half his crew was in the med bay because of the Jedi that Zeen had helped and asked who she was to him. Unconvincingly, he finally said she was no one to him.

Safely back onboard the Jedi training ship, the padawans comforted Zeen on the loss of her friend and the loss of her home. Lula especially comforted her and seemed to imply that Zeen may be trained as a Jedi. As an added bonus, they were also about to visit “the best place in the galaxy”, Starlight Beacon. The issue ends with the Jedi looking out the window at Starlight Beacon, which was described as “a ray of hope for all to see“.

This was my first comic book review and I had fun reading it. With the exception of Yoda, absolutely everything was completely new to me and it took some time to remember who was who, especially since all the names are alien. There are no Lukes, Bens or Hans. It’s all Tromaks, Zeens and Buckets of Blood. The colors are very, very bright. Some of the frames are extremely busy. Look at this one, for example: 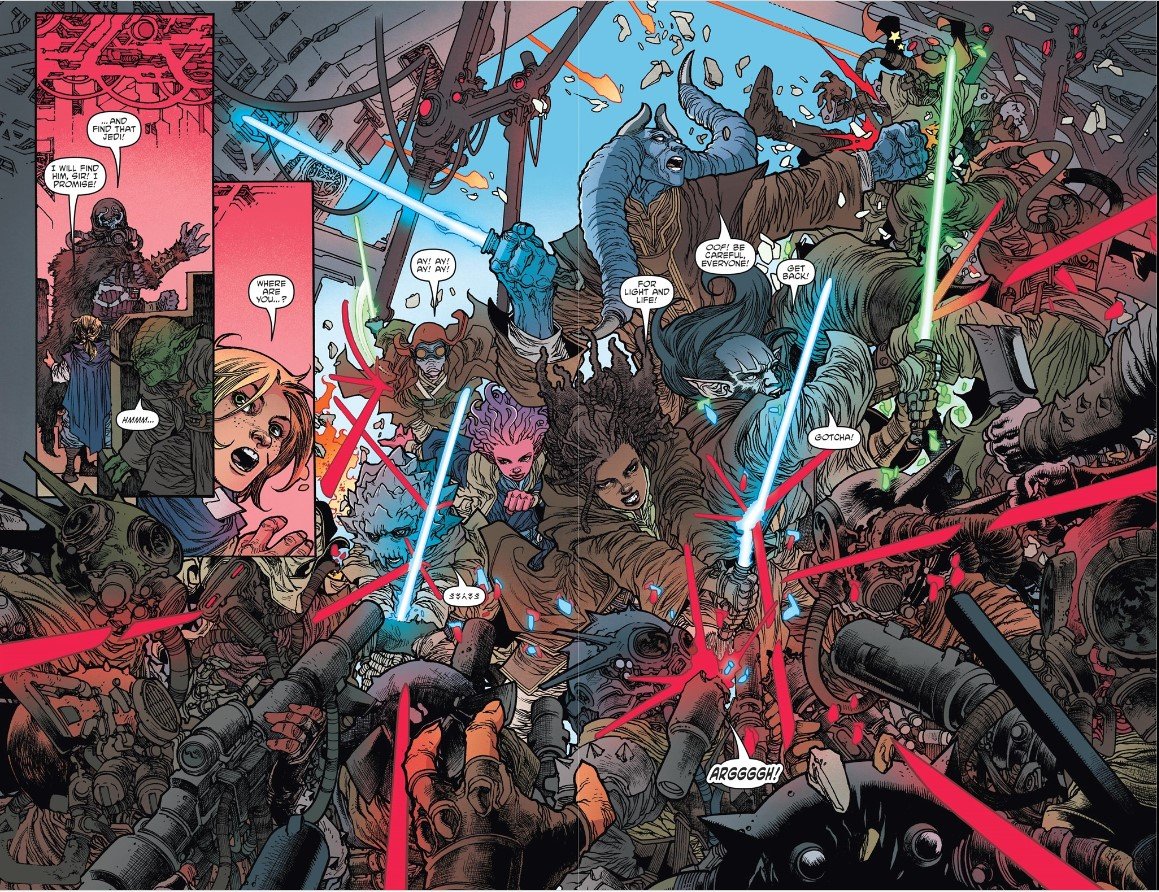 Lots of detail in the artwork in this issue.

Since the Nihil are all different in appearance, it can sometimes be difficult to differentiate a person from a gun sometimes in a crowded frame. It’s certainly easier with Stormtroopers. Also, Marchion Ro’s design is disappointing. He looks too much like Darth Vader:

I’m curious to see where all of this goes. At two hundred years before The Phantom Menace, it will be interesting to see part of Yoda’s life. If this series progresses long enough, Yoda will see Lula Talisola grow old and die. He has probably seen this happen many times. After living long enough to see many of his students grow old and die, I can see how he might tell Anakin not to mourn or miss people after they die in Revenge of the Sith. He must have become desensitized to death.

I recommend this issue and this series. It’s just starting out and has a good mix of action and humor. It looks beautiful, even if it’s a bit busy at times. Here’s a preview of issue #3: 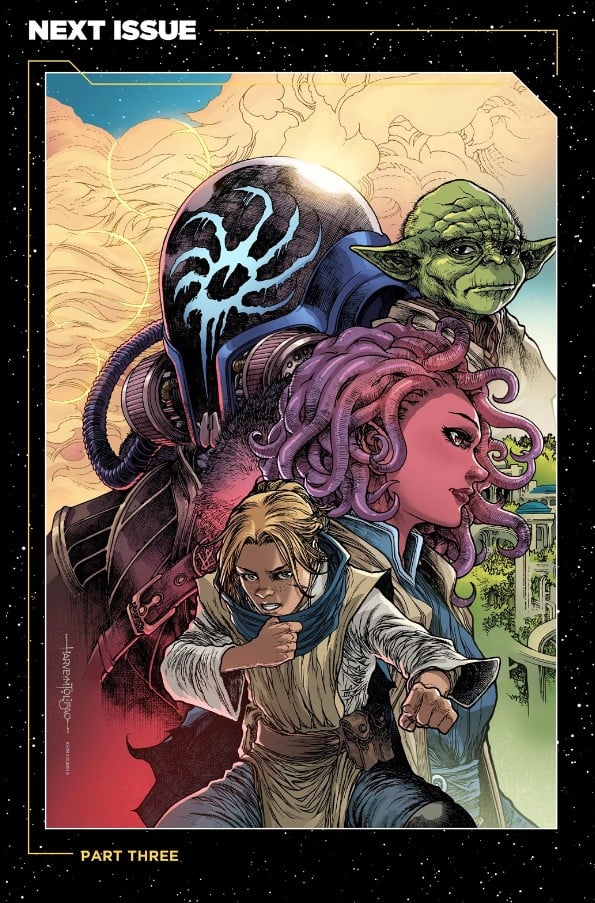